That feeling, when you find out something world-shatering, and then it turns out it's not new and people just didn't bother to tell you? That feeling we had in droves.

We tried to get to the CIC, Dawn, or rather her autonomous command module as I was told later, decided that we are a threat and locked us out. Normally, that wouldn't be such a problem since Piotr had a cutting torch and Hans had breaching charges, except the torch stopped working. Radio got one-way, we could listen to the Interest but they couldn't hear us. Eventually, Frank got in with a hardline and a repeater, so we could talk to each other again.

And Frank and others also tried to cut through some now locked door, and none of their torches were working. They wouldn't ignite. Explosives also stopped working, somehow. And rifles. And the Dawn started getting colder, and there was actual ice forming on the walls, which is pretty much impossible in vacuum. Laws of physics suddenly meant jack shit. We were stuck in the ship and the gravity was increasing and we couldn't get out and it would eventually crush us and and and I was panicking a little. A lot, actually.

XO got William out of the Medbay and he managed to open some doors. Piotr suggested reactor control room, so we could shut things down, but it was locked as well, and William couldn't get this door open - some kind of super-override from the main computer.

The gravity was getting worse. On Dawn it wasn't so bad - 1.23 G or something, measured by my suit, but on Interest, which was closer to the ragged edge of the distortion field, it was approaching 3 G and that was bad. Captain was already out of commission, with XO running things, and Felicity shut down most of medbay because her improvised beds wouldn't survive this.

We found a way inside the reactor control room, through maintenance shaft and I was the smallest, so I was the one to go. It was really dark and scary. I mean, all of this was scary, we were being dragged super-deep into the Hyperspace, Physics went on vacation and everything, but there's scary, and there's alone-in-a-60-by-60-centimeter-shaft-with-only-a-flashlight scary.

Inside I went to open the door using the emergency lever, and one monitor lit up, and someone or something warned me not to. In an actual chat window. I grabbed the keyboard and started replying.

I relayed all this to XO and Will, and XO had an idea - by the time this ship was decommissioned, he was still Hegemony Space Navy Captain. And it probably didn't receive any security updates in the years it was sitting here, so the database would still show him as a Hegemony Space Navy. I opened a video channel to him and he told me what to write:

A long text followed, full of ████ bars. The ship was being controlled by the computer, and it decided the ship was infected by something called Black Sun. Details about what Black Sun is were ██████ but the current objective was something very very curious: Reach flight level of 15k 𝝌, as that is over 20k above its natural habitat, and thus is far enough that it should kill it.

By that time we had over 2 G even on the Dawn, I was up for 22 hours and slept like 4, so I wasn't thinking exactly straight. But. Huh. Natural Habitat. Meaning lifeform. Alien lifeform, living in hyperspace. I mean I guess I knew, because I felt its presence, but still, this is something. We never found alien life, I mean I guess the War kinda was that? I don't know.

And of course, the 𝝌 numbers are supposed to only go up, the deeper you go to hyperspace. I asked the crew - much G of distortion would 15k 𝝌 need? Can 𝝌 really go negative? I don't remember the number, but 15k 𝝌 = kill us all, if we don't stay really close to the center of the field and maybe then. And negative 𝝌 is crazy-talk.

Except the ship had to get infected somehow, so it had to have been there, in the negative hyperspace. Hypospace? Is this what the rumored new engine, that won us the War, is this what it does?

Will and XO decided that Will should hack the computer again, and he will add Sergei some extra rights - give him access to Q33, and maybe some more. Will then stopped replying. XO sent Felicity after him.

I tried to open the door again, and the computer warned me again, and I thought, well, what can it do? There aren't any guns around, and it's not like it can vent any more of the ship, it's already not pressurised. So I grabbed the handle.

Turns out the computer has very sticky anti-personnel and fire-retardant foam at his disposal, and can fill the whole room in less than a second and then it turns into rubber and traps you and you can't move and nobody can help you because the door can't be opened from the other side because torches don't work and and you suffocate and and.

I managed to calm down. Foam can't suffocate someone wearing a spacesuit. The pieces of the puzzle started to come together in my head. Things get hot when they leave hyperspace. This presence I felt, Black Sun, was supposed to be from negative Hyperspace - it would make sense it is making things cold. Some walls were - 50 C already, and everything was getting colder and colder. They didn't have any reason to be - but torches didn't have any reason to stop working either. And the foam would get brittle and crack if it got cold. So I opened my mind and called it to me. I got really cold - but so did the foam and it fell apart and I opened the room and walked out. Piotr jumped up like I scared him.

I asked Alison to scan the ship, look for the epicenter of the cold. Hyperdrive, of course. I walked there, I wanted to talk to the lifeform, and find out what happened. Maybe it is just trapped here, and wants to go home? I opened my mind to it. I can't quite describe, how it felt, to touch an alien mind. It was scared, the Hyperspace was hurting it as much as the gravity was hurting us, and it wanted to survive.

Then Alison said her controls aren't responding, and our ship started pumping fuel into the Dawn. And someone mentioned
that Will is connected to it and he attacked Felicity? I'm not sure, things got kind of hazy. I think Frank cut the line between our ships, and we lost communication again.

I opened a channel, me, XO and Alison. I asked whether we can't somehow go negative. And Alison said we could - it's possible in theory, if we have unstable distortion field and really quickly turn of the Hyperdrive thrust from higher than normal 𝝌, we could go negative. The equations make sense, only nobody ever did it. Unstable field and high 𝝌 was exactly what we had.

By that time, XO got on the bridge - the ship convinced he's an admiral, with all necessary clearances. Will's work. He ordered the computer to stand down.

Only Sergei had different idea. He wanted to help the computer to kill the Black Sun. Move us all near the hyperdrive, so space curvature is the smallest, and get Interest out by triggering creating another distortion bubble inside this one - another thing that theoretically possible but was never successfully done. That would expose us to more gravity, kill the Black Sun and maybe destroy us all.

In the end, I managed to convince the XO to try the non-violent way. I think the Black Sun's influence had something to do with it, I felt it in the room. We synced Dawn's and Interests's hyperdrives, strapped in and got going. The field stabilized into a perfect mirror bubble, and then we crashed into the normal space. And went through. We lost the Interest.

In the negative space, I felt ... at first a sense of belonging, like this was where my people are, where I should be. Sense of community, of love, of home. Then I felt I like had a flight to catch, like I needed to hurry and get out before I miss a window ... and the in was gone, and we appeared in normal space. The Black Suns presence was gone. We were few thousand klicks from the Interest and on a vector to hit some asteroids.

I stabilized the ship, and programmed it to fly to and sync vectors with the Interest. It felt incredible. Much larger ship than Interest, and without its main drives, but it jumped to my command with lightness and eagerness and pull. Just the manoeuvring thrusters could pull over 10 G (and maybe kill everyone aboard, depending on vectors and whatnot).

But my euphoria (which, looking back, might had more to do with Hyperspace, suddenly not being in 2.5 G gravity and Black Sun leaving) didn't last long. I felt something is coming, and few seconds later, hyperspace event registered on the sensors. It took a while for sensors limited by speed of light to catch up - the ship identified itself as TCC vessel - Terran Corporate Commission, government agency, basically cops that the Terran Hegemony sends to look whether corporations aren't doing something then shouldn't.

I organized a funeral for the four dead we found in the food store. As a military ship, Dawn had not exactly small store of space coffins. I tried to do a speech and I think I looked like an idiot, but whatever. Alison was there, XO was there, few other ex-military people. Hans did a salvo, and he looked happy his rifle is working again.

And with that, I got to my cabin, hugged Eileen, whose ankle was still fucked from when the gravity suddenly started, kissed her and went to sleep. I dreamt about the field starting again, and gravity crushing everyone, and me just watching, not being able to do anything.

Will finally woke up. He really assaulted Felicity, and spent most of his time in medbay tied up. He said that the ship computer took over his body when he was hacking it, and that it wasn't him. It was really strange. But he looked okay, and that's good.

The TCC ship arrived and docked with us. Small one, sized as courier ship with two to four crew, but big enough to blow us up, if it had military-grade weapons. Man and woman got out, and took off their helmets. They had guns on their belts. They looked similar, like a brother and sister, and they had asian features, but not of any specific ethnicity. They made me think they were clones.
Maybe this world is another planet's hell.
- Aldous Huxley
Nahoru 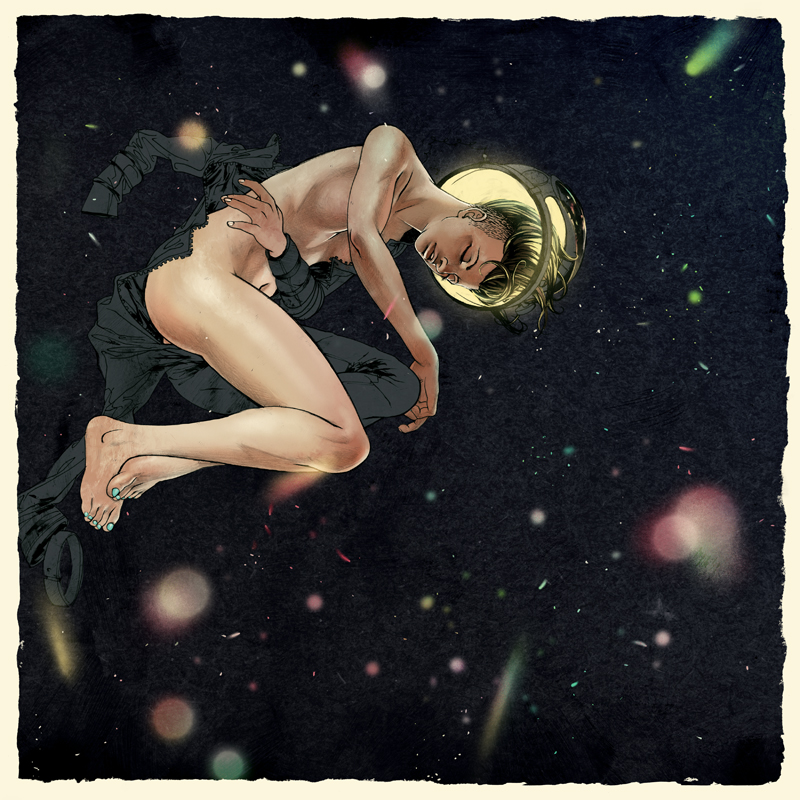 Always bring a gun to a puppet fight
Nahoru